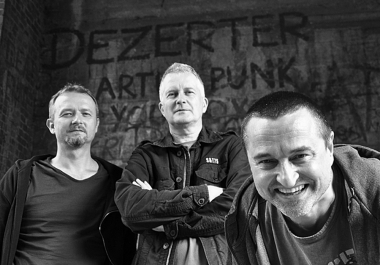 Dezerter, founded as SS-20 in May 1981 in Warsaw, is one of the most popular punk bands from Poland. The band was founded by three students of Warsaw's vocational high school (technikum) - Robert "Robal" Matera (guitar), Krzysztof Grabowski (drums), and Dariusz "Stepa" Stepnowski (bass). All three were born in 1963, and went to the same class. From the beginning Grabowski wrote lyrics, and Matera music. The three classmates originally planned to name their band Sektor A, but after some time changed their minds and named it SS-20. Soon afterwards, they were joined by another student of the same school, Dariusz "Skandal" Hajn (voc., born 1965), who, as Grabowski later stated, "looked like a real punkrocker". The band started regular rehearsals in the summer of 1981. With fast guitar riffs and intelligent lyrics written by Grabowski, Dezerter's concerts drew thousands of fans and its LPs were very popular, especially in the late '80s and early '90s. The most famous Dezerter's live appearance took place during the 1984 Jarocin Festival in Jarocin, Poland and it was attended by some 20,000 people. The concert was recorded and later parts of it were released (together with four songs from the 7″ EP recorded in 1983) on the LP Underground Out of Poland. The LP was produced by Joey Shithead, vocalist of a Canadian band D.O.A.. Dezerter however is not widely known in other countries, perhaps because the band refrains from singing in the English language. Nevertheless, it played in several European countries, as well as Japan and the U.S.A. (in New York City and Chicago, early November 2009, commemorating the 20th anniversary of the fall of the Berlin Wall).[1] In 2010, Grabowski's memoirs "Dezerter, poroniona generacja?" ("Dezerter, aborted generation?") were published in Warsaw.